How To Fix A Door That Won’t Lock 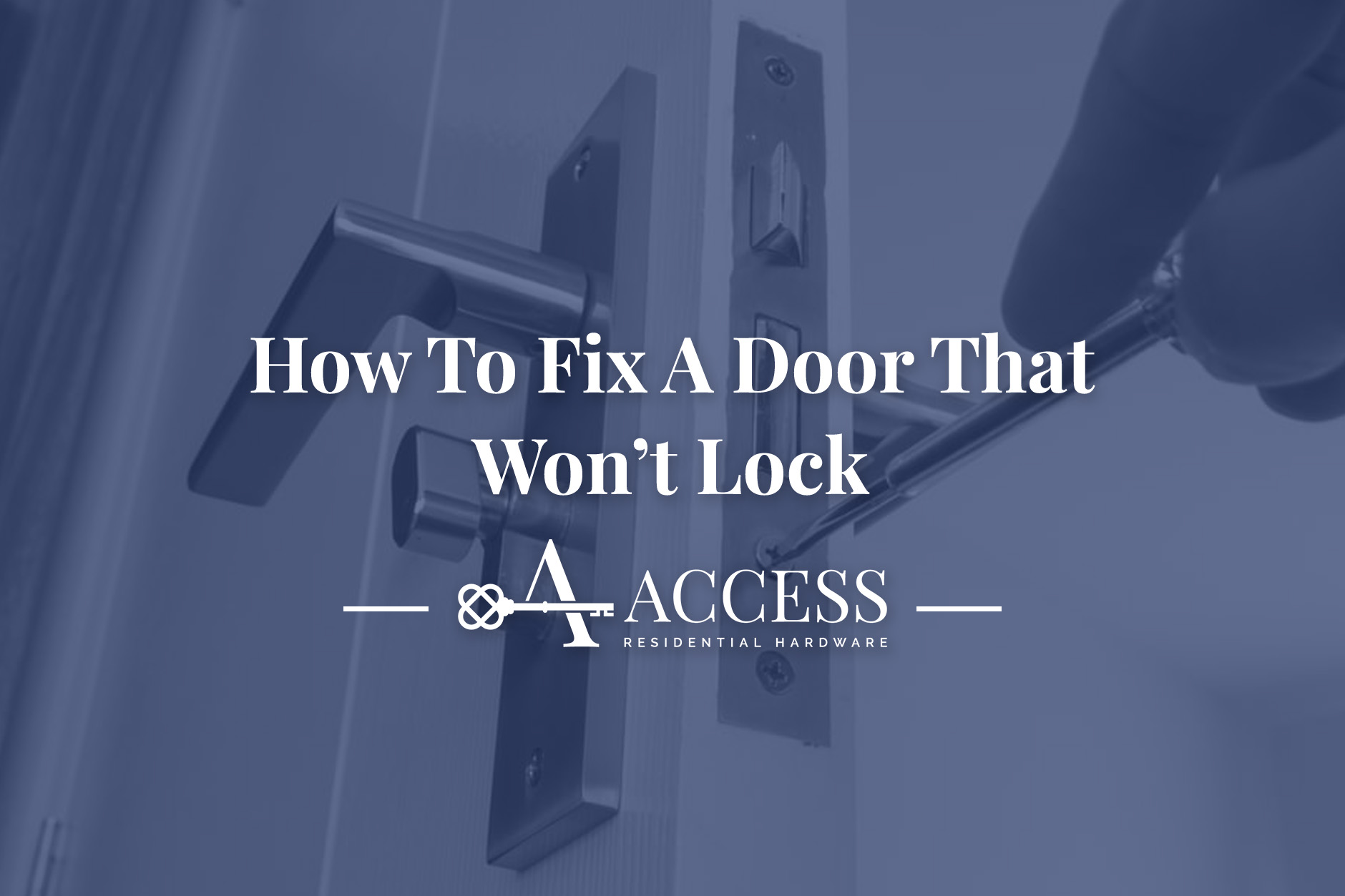 If your door isn’t locking, chances are that the problem is with the latch instead of the locking mechanism. If a strike fails to penetrate a door jamb, either the door has become warped or the screws have loosened and the plate has shifted. When the door closes, the strike doesn't slide past its plate into the jamb's receiving hole, or it goes in but doesn't reach bottom, preventing the door from locking properly.

Locking problems are common issues but they need to be addressed. Whether a door is meant to be locked for security or privacy reasons, failure to do so can mean embarrassment at best (think a bathroom door that won’t latch) or a security issue at worst. In this article, the team at Access Residential Hardware explains how to fix a door that won’t lock.

Depending on the source of the locking issue, you may need the following tools for this project:

Step #1: Identify the Source of the Misalignment

Sagging can occur at the hinges of older and frequently used doors as gravity pulls them down. The door may swing in a different direction as a result, leading to a misaligned latch that contacts below the strike plate hole. If sagging appears to be the source of the locking issue, ensure that the door is properly supported by the door frame by tightening the screws in the hinges.

If sagging hinges aren’t the issue, check the strike plate. Place the plate back in the mortise if it has slipped out, and tighten the screws with a Phillips screwdriver if it is loose. If this doesn’t solve the locking problem, try adjusting the door stop (steps are outlined below).

Step #5: Sand Down or Shim Under Hinges

If the problem persists, the door frame may need to be sanded or shimmed.

Locking issues are often caused by hinge mortises that are too shallow or too small for the hinge's size. In this case, sand the hinge mortise down to the correct depth and sand the edges to accommodate the hinge. Replace the hinges and verify that they are flush with the door frame and that the door is balanced properly.

In order to shim the hinges, remove them from the door frame and cut a small piece of cardboard (or similar material) to fit into the mortise of the hinge. Replace the hinge after the cardboard has been inserted and check the door. When the problem is caused by sunken hinges, shimming usually corrects the alignment of the door. This cushion of extra material supports the hinge and balances the door.

If the door adjustments did not solve the problem, the strike plate hole may be the cause. You should check whether the latch is located above or below the hole, as well as how much the latch is misaligned. The strike plate hole may need to be moved if it's out of alignment by more than ⅛”. Try enlarging the hole if the misalignment is only ⅛” or less.

Is It Time to Replace Your Lockset?

Although these steps can help solve locking issues related to components like the strike plate or door jamb, different measures are needed if the door knob’s mechanism has failed. If this is the case, you’ll need to replace the entire lockset.

At Access Residential Hardware, we sell a premium range of interior and exterior door hardware in a variety of styles, from traditional door knobs and levers to advanced keyless entry solutions. Whatever your practical or aesthetic needs, we have a lockset that will both work well and blend seamlessly with its surroundings. To learn more or place an order, call 866.752.9002 or use this contact form and we’ll get right back to you.